Recently, I was looking at synonyms in the dictionary for influencing and I found words such as affect, have an impact on, determine, guide, shape, change, alter and transform. These are generally positive terms particularly if influencing has a constructive impact. Then as I scrolled down, another set of synonyms appeared such as sway, control, govern, decide, bias, prejudice, pressure, coerce, intimidate, browbeat and brainwash. All without question were negative with significant consequences to relationship and trust.

When I queried managers in a leadership workshop on what might account for such a difference, the answers ranged from situation, context, audience and the style of the person who was influencing. Interpretations and perceptions were also mentioned.

Not fully satisfied that we had reached the core that would explain such opposite interpretations I decided to ask what one wants to achieve by influencing?

The responses were quite immediate. They all centered on the desire to get buy-in, help the person understand, support the point or ideas presented and generally convince the other.

If the communication is advocating for the other to do something the influencer wishes he/she would do, then it is understandable that perceptions could include a sense of being manipulated and possibly even pressured. After all, Cialdini, who wrote a book on influencing, was motivated to do so because he was purchasing vacuum cleaners from door to door sales people that he did not need and found himself wondering what they had over him to convince him to do something that he actually did not wish to do. Clearly not the best of beginnings to build a relationship or to have the positive impact of the first group of synonyms.

Considering the almost opposite meaning of these synonyms, it became apparent that what was needed was a 180° redefinition for influencing. So I asked where else do we use the word influencing with only extraordinary positive outcomes? When asked such a question, there was a pause as the workshop participants gathered their thoughts, then a manager said: “I would use the word influencing for someone who has had an extraordinarily positive impact in my life. A transformative impact.”

With that redefinition, I then asked other participants to think about such a person in their lives. What would be the feelings and memories? The responses were very similar and all centered around appreciation, gratitude and thankfulness. There was no perception of the influencer wanting to convince or get buy-in, rather an undiluted desire to see the other be the best that they can be. It was simply rooted in care and love.

At the end of the workshop, I gathered all my notes and decided to design a workshop on influencing that proposed a paradox. The paradox being that the influencer without seeking to convince, rather just wanting to support, has a much greater capability of being a catalyst for change and buy-in without risking feelings of manipulation, pressure or worse.

I created a diagram to gather the many skills such an influencer would display: 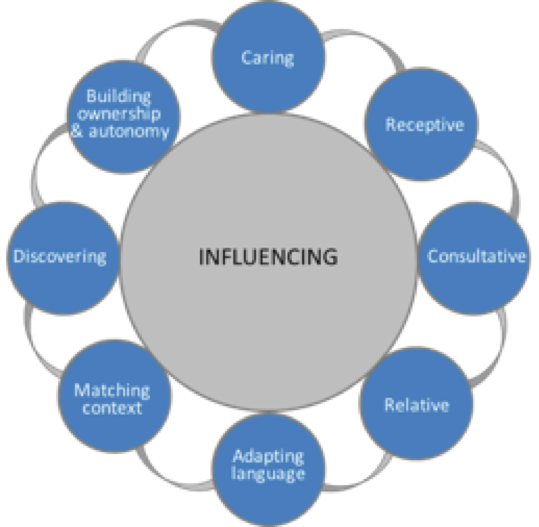 Borrowing from the wisdom of the leadership workshop participants, I compiled some critical skills. Top of the list was listening, not just hearing, but listening with presence, interest and care. Next was the ability to inspire and evoke the best in the other. This was achieved through empathy, affirmation, focus and guiding through artful questions. Often, responses generated from open-ended questions were followed with reflecting, paraphrasing and summarizing.

Having mapped these qualities and skills, the paradox was validated. I had come across the work of William Miller (Motivational Interviewing) and his discovery that a telling, directing and lecturing style invariably produced a defensive response coupled with justification and denial and ending with disengagement and withdrawal. Miller also engaged the same subjects with someone exhibiting the skills we highlighted for an influencing style and this time, the responses were quite different. The same person felt understood, affirmed, accepted and willing to cooperate. Hence the paradox, while the influencer is not attempting to create buy-in, the person he or she is engaging is feeling accepted and open, interested in wanting to hear from the influencer and even eager to follow through.

In summary, leaders who are genuinely focused in caring and supporting, wanting to see the success of others and truly interested will know they have had an influence as they will be met with gratitude, thankfulness and a keen desire from those around them to co-construct a successful future.